SAY NO TO PAPER: USE SPRINGPAD!

An Evernote fan, I haven’t really given Springpad a fair shot. But, I believe it’s even better. Social Media consultantMolly Quell, who swears by the app, has written a guest blog for The Tini Times about what makes it the perfect Say No To Paper tool. Here goes…

I have been in the slow process of moving to digital for years. First, I ripped all my CDs and DVDs. Then I moved from a paper agenda to Google Calendar. Next was scanning all of my recipes. After running out of space in my address book, I finally succumbed and moved all of my contacts online as well.

And then all that was left was my tasks/to do list. I tried a variety of applications. The tasks feature in GChat, then I tried Evernote, then Astrid. Yet I still ended up using a legal pad on my desk with the day’s to do list. And I would still take paper notes when out of the office about things I needed to do. Then I discovered Springpad.

Prior to Springpad, I was using a combination of calendar reminders, task lists, a notepad and basically taping stuff to the wall next to my desk. Now I’ve created a number of notebooks in Springpad with different types of “springs” as they are called. Notebooks include ones for individual projects and clients and a more broad “To Do” notebook where organize everything I’m currently working on. You can design the covers for each notebook as well.

There are a bunch of different types of springs, from recipes to files to TV shows. I’m now using Springpad to organize my contacts as well as all of my recipes. Pretty much much everything is in one place.

One of my favorite features is the drag and drop layout you can use for notebooks. You can allow Springpad to order your springs by name or date due or you can use a drag and drop interface to organize all of your items however you want. 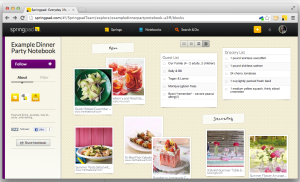 My desk is now notebook free and I’m moving towards putting everything into Springpad when I’m in meetings, etc. (Hey, change is hard.) But I no longer have 47 Post Its on my desk and multiple to do lists stuffed in my bag.

Lifehacker compares Evernote and Springpad with a really detailed explanation if you’re having trouble decided between the two.

Molly Quell is a social media consultant who has lived and worked all over the world. Born in the US, she currently resides in the Netherlands where she focuses on helping small businesses and startups develop their online presence. She blogs about social media at The Marketing Salon. She has just published her first book on social media, The Five Biggest Mistakes, available for sale on her website, where you can see her other professional work: www.mollyquell.com.

← Say No To Paper: The To Do List Conundrum
TU Delft – a campus tour →